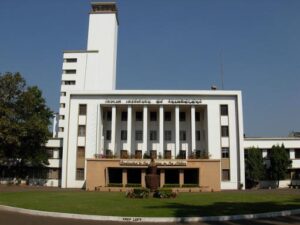 COVIRAP has an automated pre-programmable temperature control unit, a special detection unit on genomic analysis, and a customised smartphone app for results.
The machine has an isothermal nucleic acid amplification method, which did away with the need for a thermocycler.
Isothermal amplification of nucleic acids is a process that rapidly and efficiently accumulates nucleic acid sequences at constant temperature. The Isothermal Amplification Techniques have been developed as alternatives to Polymerase Chain Reaction (PCR).
Thermocyclers are instruments used to amplify DNA (deoxyribonucleic acid) and RNA (ribonucleic acid) samples by the polymerase chain reaction.
Once the sample is processed in the machine after being mixed with solutions developed by the IIT team, treated paper strips (similar to the pregnancy strips) are dipped into it, and the emergence of coloured lines will depict the presence of the virus. 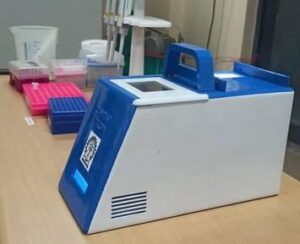 Benefit of COVIRAP Process:
Economic: It is a cheaper process, its machine costs less than Rs. 5,000 and the test kits would each cost about Rs. 500.
Quicker: The test is completed within an hour while RT-PCR test (Reverse Transcription Polymerase Chain Reaction) takes 3-4 hours for testing the sample.
Simpler to Handle: The portable test unit that can be handled by unskilled operators outside the lab environment.
It is also better than the FELUDA test because the FELUDA employs a gene editing technology called CRISPR-cas9, which requires a lab testing environment.
Reusable: The same unit can be used for a large number of tests on replacement of the paper cartridge after each test.
Efficient: This assay (testing) holds the capability of detecting extremely low levels of viral loads compared to any other method based on similar principles of testing.
This means that very early stages of infection can be detected, thereby isolating the patient and arresting the uncontrolled spread of infection in the community via asymptomatic patients. 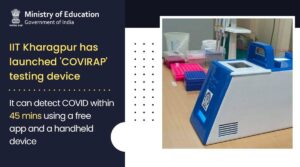 High Accuracy: It correctly detected 108 out of the 115 positive samples identified by an RT-PCR machine, and 83 out of 85 negative samples, meaning that it has a 94% sensitivity and 98% specificity in comparison to RT-PCR (i.e lower than RT-PCR).
Other Usage: The COVIRAP testing machine can also perform tests other than Covid-19. It can be used in influenza, malaria, dengue, Japanese encephalitis, TB etc, which are under the category of isothermal nucleic acid-based tests. 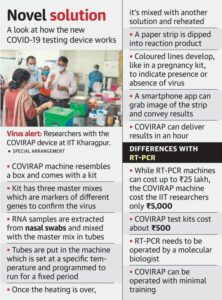